On Tuesday, September 9th, celebrate the crowing of the nine month old Mary Stewart as Queen of Scotland in 1543 with a 25% off sale.

And as always, if it’s already on sale, take another 25% off!

All you have to do is tell the cashier which you prefer:
babies, monarchs or baby monarchs 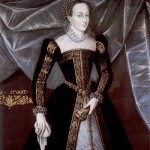 And just in case you were wondering, here’s a list of other things that happened on September 9th that we could have based a sale on:
337 – Constantine II, Constantius II, and Constans I succeed their father Constantine I as co-emperors. The Roman Empire is divided between the three Augusti.
1087 – William II becomes King of England, taking the title King William II, (reigned until 1100).

here is a link to the thesis generator

1379 – Treaty of Neuberg, splitting the Austrian Habsburg lands between the Habsburg Dukes Albert III and Leopold III.
1776 – The Continental Congress officially names its new union of sovereign states the United States.
1791 – Washington, D.C., the capital of the United States, is named after President George Washington.
1839 – John Herschel takes the first glass plate photograph.
1850 – California is admitted as the thirty-first U.S. state.
1863 – American Civil War: The Union Army enters Chattanooga, Tennessee.
1923 – Mustafa Kemal Atatürk, the founder of the Republic of Turkey, founds the Republican People’s Party.
1926 – In the United States the National Broadcasting Company is formed.
1940 – George Stibitz pioneers the first remote operation of a computer.
1947 – First case of a computer bug being found: a moth lodges in a relay of a Harvard Mark II computer at Harvard University.
1956 – Elvis Presley appears on The Ed Sullivan Show for the first time.
1965 – The United States Department of Housing and Urban Development is established.
1966 – The National Traffic and Motor Vehicle Safety Act is signed into law by U.S. President Lyndon B. Johnson.
1969 – In Canada, the Official Languages Act comes into force, making the French language equal to the English language throughout the Federal government.
1972 – In Kentucky’s Mammoth Cave National Park, a Cave Research Foundation exploration and mapping team discovers a link between the Mammoth and Flint Ridge cave systems, making it the longest known cave passageway in the world.
1999 – Sega releases the first 128 bit video game console the Dreamcast.
2001 – At exactly 01:46:40 UTC, the Unix billenium is reached, marking the beginning of the use of 10-digit decimal Unix timestamps.
2009 – At exactly 9:09:09 PM, the Dubai Metro, the first urban train network in the Arabian Peninsula, is ceremonially inaugurated.